Home » Why Women Should Pursue MBAs in Europe?

Why Women Should Pursue MBAs in Europe? 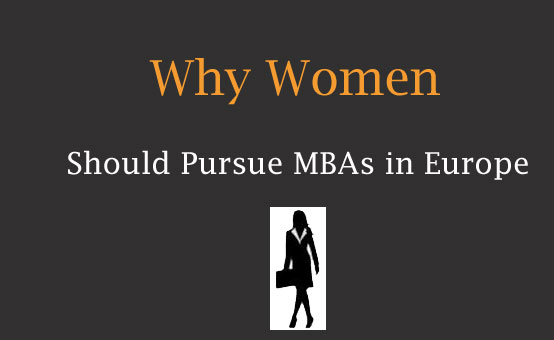 Why Women Should Pursue MBAs in Europe

Did you know that women now make up 40% of students at top MBA programs?

But while more and more women – especially in Europe are going after MBAs, there is still a gender imbalance when it comes to high-ranking management roles.

According to CNN, there are only 24 female CEOs for every 500 companies.

Naturally, becoming CEO of a company is the absolute zenith. But the numbers are still disheartening. It essentially means that 40% of our talent pool is not competing for 40% of the top business jobs.

The key, though, is getting more women into the pipeline in the first place, which means preparing them in the right way.

An MBA helps. With an MBA – coupled with experience – women have a better chance of landing a high-ranking management position at a top firm.

And this is a good thing for everyone, because gender diversity makes for good business.

Gender diversity is often at the top of many corporate agendas. There are a few good reasons for this:

Consider this too: Women make 41% of all purchasing decisions. As consumers, they have a voice that needs listening to.

And who better to listen to and understand this voice than women?! As someone who has seen first hand the life changing impact of an EMBA, I would like to inspire women to take the plunge and invest in either an MBA or EMBA. Here are a few stories of incredible women and MBA grads who are changing the world.

Still not convinced that trying for an MBA is worth your time and effort? Here are 3 stories of real women who went after an MBA and are now making a positive impact on business – and the world.

Rai Dhillon is a successful career woman who is using her MBA to bring about positive change in the world. She knows all too well that the media can have a negative influence on the world, but she’s determined to use her rich experience to harness the media as a positive energy.

Dhillon started her career in banking before moving into journalism. Eventually, she settled on a career path that took her to the London Business School MBA. Thanks to her background in journalism, she was able to see how media and business could work together in tandem and benefit one another.

She was working on a project, which involved making films about a war in Uganda, where child soldiers were heavily enlisted. This led to the creation of the Legacy Scholarship Program. The program served to assist children who were victims of war in obtaining secondary education.

“This is what I always wanted to do,” explains Dhillon. “I wanted to make a positive difference in some way. During my career, I saw the power of the media as something to be used for the power of good. You can utilize everything.”

Dhillon has learned that being true to oneself is key. As a journalist, she often came across situations that tested her resolve. “I have been asked to cover something that wasn’t factually correct – to sensationalize it.”

Rai Dhillon says that women who obtain MBAs should use their knowledge and power to help change the world for the better. “Be sensitive to others, but yourself too. If you miss that, you can become indecisive, which will make it much harder to navigate your career from that point.”

Tina Nyfors has always been a stand out professional and a forerunner for women in Europe.

Being a mother and also an IMD MBA grad, Tina used her MBA to move from directorship level in private equity to VP of Corporate Development for Advanced Digital Broadcast Holdings.

When asked how an MBA improved her advancement opportunities she said, “It gives you a great confidence boost to be able to justify your views more quickly and accurately, which in turn increases your visibility and your promotion opportunities.”

Today Tina gives back to the MBA community with finance workshops and simulated interviews.

Interestingly enough when asked what factors have been the most important in shaping her career she cited her 2 children and her MBA “If I had to select two real factors which have helped my career progression, I would say the MBA and, maybe controversially, my two maternity leaves. I was significantly and measurably more efficient when I returned to work.”

Vivienne Cox is a former CEO of Air BP. She obtained her MBA at INSEAD MBA business school and now works as the Chairman of Climate Change Capital. And she has sharp advice for women seeking MBAs:

“Women often end up trying to be a bit like the men. Just be yourself – be the woman you are. Don’t try and take the men on at their own game.”

Wise words, and words worth listening to from a woman who has seen it all in her effort to make something of herself. Cox’s rise to a high-ranking position in a male-dominated work world was not easy. Growing up in the country, the city seemed like a million miles away.

“I grew up in Devon, which is in the countryside a long, long way away from London. So there was nothing in my experience as a child that drew me to the career path I chose.”

After studying for, and obtaining an MBA, Vivienne still wasn’t all that sure where her career was headed. Then she discovered what motivated her more than anything else:

“What I actually liked doing was mixing – and engaging – with interesting people.”

One of the questions that often gets thrown at women, though, is how they will balance work with taking care of the everyday chores they are expected to look after by tradition – such as looking after children or making sure the plants in the window don’t die.

It’s a depressing question, and it seems unfair that women are expected to work even more hours just so that they can balance a hectic personal life with a successful career.

Cox bristles at the question but offers some useful advice: “Sometimes the hardest conversation is actually the conversation with yourself. Trying to work out what you actually need.”

The be all and end all is that gender diversity is increasing in the workplace – if however incrementally. Anyone who has read Malcolm Gladwell’s Outliers knows all too well that to be a success in life and in business, you need to put the hours in.

Janine Allis, founder of Boost Juice, knows all too well that to be a success in business, women have to work as hard as men – if not even harder.

“People will tell you that it’s important to gave more time outside work, but there are times when that is simply not possible if you want to be at the top of your game,” says Allis.

MBAs, or as in my case, an EMBA, do take time and effort, but the rewards can be huge. I can attest that it is more than just a degree, it is a life changing opportunity.

This post is written by Gretchen Shaw. Gretchen is an author, blogger and entrepreneur with a penchant for baking. She is passionate about communication, continued learning and connecting people. You can follow her on Twitter: @shawgret

Why do These 20 MBA Programs Come out on Top?

Be the first to know best course offers

Courses4you dedicated to your personal development. Whether you want to gain new knowledge that will benefit your business or improve your marketing. Our experienced team constantly strives to discover the best online digital courses from the most reliable sources on the market.